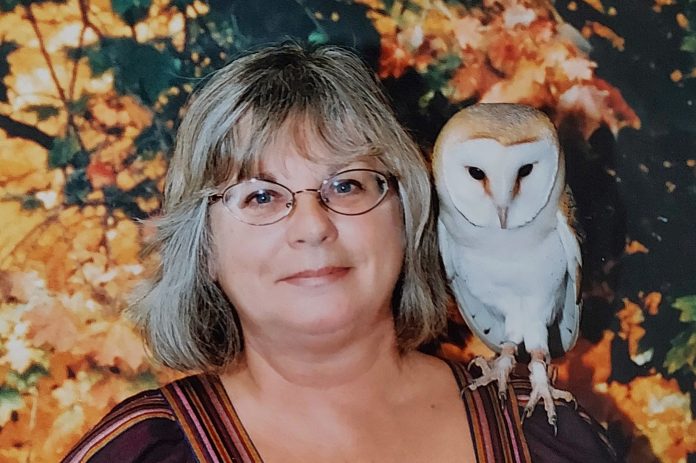 Jan Ayres, the organiser of Waltham Abbey Folk Club, died peacefully in the care of St Clare’s hospice, Harlow, on 1 April after suffering from cancer. She was 74.

Jan was very active on the folk scene. She was a regular at Loughton, Havering and Walthamstow folk clubs, and was online all through lockdown at the London Sea Shanty Collective’s Saturday singaround and Sharp’s in Isolation, where she can be seen on their YouTube recordings reading her poetry and knocking out a ditty. She had taken over the booking of acts at Waltham Abbey from Lynne Heraud in around 2007, when it was based at the Royal British Legion, and continued up until lockdown hit last March.

Jan’s love of folk music and poetry started in the 1960s in Walthamstow and continued through her life. She travelled all over the UK, going to festivals at Broadstairs, Towersey and the Sussex Song and Ale, to name just a few – although with Jan that would be song and red wine.

She booked guests both new and established at Waltham Abbey, and always encouraged up-and-coming performers to take to the floor.

Jan was generous with her time and support, even sewing friends’ tatter jackets by hand. She led an annual wassail in Waltham Abbey Orchard as well as her Summer Sing festival at Lambourne End. Many have fond memories of something she said or did – or got them to do, like the “dancing on a small board” contest at the Summer Sing. Dancing on a three-foot square of hardboard after all that ale!

She wrote lots of humorous poems and would tour folk clubs reading them.

Jan was born in Tottenham and moved to Waltham Abbey with her family in 1956. After leaving Chingford high school she started work as a librarian.

She was a beatnik in the 60s (as hippies hadn’t been invented yet) and she loved to go dancing. In 1973 she studied art and pottery at Trent Park Polytechnic and became an art teacher in 1977. She went on to teach students with special needs.

In 1998, she took early retirement but stayed on for a few years as a teaching assistant at Waltham Holy Cross primary and King Harold secondary school in Waltham Abbey, and gave private tuition right up to the first lockdown last March.

Jan was always busy with something and always creative: you couldn’t get up her stairs without passing her artwork and the model heads she made for folk festivals and the Waltham Abbey Carnival.

Her love of amateur dramatics had her starting in the chorus of Gilbert and Sullivan plays when she was younger and, after joining the Becket Drama Company in Waltham Abbey, she performed in numerous productions of Noël Coward and Agatha Christie. Her favourite role was the villainess in The Hound Of The Baskervilles.

She was also a leader of the Woodcraft Folk for many years and took the groups to regular camps.

Jan loved her garden. The front and back gardens were crammed, and the house had potted plants on every surface. She also loved cats. Lots of cats. Stray cats, cat paintings, cat ornaments. They covered every surface next to the pot plants.

Jan was a spiritual woman and a practising pagan with much knowledge on the subjects of the occult, palmistry and astrology. She read tarot, was an energy healer and a see-er. She was also a finder of lost things, a useful gift to have. As her eyesight failed her, she became a member of a psychic circle and a medium.

Her failing sight did not stop her getting out and about to the festivals and folk clubs she so loved and she was very grateful to those who were happy to give her lifts.

It has been said that she wrote “women’s poems”. She hoped, however, that the other half of the human race would also manage a smile at her work.

Life’s not long enough to waste,
Life’s to savour, enjoy the taste.
So come on folks, it’s really not rude,
To dance, in sun or moonlight in the nude.

Sylvia Needham and I and a great many others have lost a very, very good friend in Jan Ayres, who died on 1 April. We are all feeling the loss of an effortlessly kind, generous, good-spirited lady – a lady with immense literary talent and a wicked sense of humour. Anyone who saw her perform or has read one of her fabulous poetry books will stand testimony to that.

She was frequently seen and revered over many years at a variety of folk festivals such as Broadstairs Folk Week, Tenterden and her own very special annual folk weekend in Essex, as well as her own folk club in Waltham Abbey.

She was a complete one-off and was loved by all who knew her and will be severely missed by us all. Bless you Jan, and RIP. They broke the mould.

Frankie Armstrong: ‘All I do is give people permission to sing’

Sandra Kerr at 80: ‘I’ve never planned anything in my life’

Sarah Lloyd - 26 March 2022 0
Sandra Kerr – singer, songwriter, teacher and beloved co-creator of the music for Bagpuss – turns 80 in February. Although lockdown has meant an...

How our folk club made reopening a roaring success – at...

This website uses cookies to improve your experience while you navigate through the website. Out of these cookies, the cookies that are categorized as necessary are stored on your browser as they are essential for the working of basic functionalities of the website. We also use third-party cookies that help us analyze and understand how you use this website. These cookies will be stored in your browser only with your consent. You also have the option to opt-out of these cookies. But opting out of some of these cookies may have an effect on your browsing experience.
Necessary Always Enabled
Necessary cookies are absolutely essential for the website to function properly. This category only includes cookies that ensures basic functionalities and security features of the website. These cookies do not store any personal information.
Non-necessary
Any cookies that may not be particularly necessary for the website to function and is used specifically to collect user personal data via analytics, ads, other embedded contents are termed as non-necessary cookies. It is mandatory to procure user consent prior to running these cookies on your website.
SAVE & ACCEPT